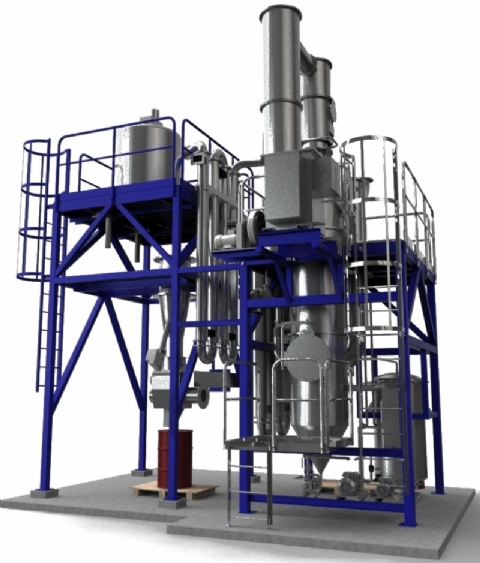 Meva Innovation AB has been working on a new VIPP (Vortex Intensive Power Process) cyclone gasifier and gas cleaner. They have had a 500kw CHP Pilot plant operating since 2009, and are building a small CHP plant for a district heating (utility) which will be commissioned in September.

and they've been kind enough to send some additional information via email:

Thank you for your interest in our technology. There are no official reports published yet, only unofficial so far. The reason is not yet completed IPR even if we have applied for several patents so far.

But to give you a better understanding about our technology I will give you a short presentation.

Our technology is named VIPP - Vortex Intensive Power Process and is a name based on the Vortex movement in the cyclone reactor.

Development of the cyclone gasification technology begun at the department of energy technology at Luleå University of Technology (LTU) in the early 90-ies and the first prototype was constructed by Energy Technology Centre
(ETC) in Piteå in 1994. The technology was thereupon acquired by us, MEVA Innovation (MI), which has continued the development work in collaboration with ETC.

In 2009 we started to build a new, industrial classed, Pilot plant in the size of 500 kW fuel power. This plant has been in batch operation ever since and results from this plant was validated by a utility company who where in need of a small scale CHP in their district heating system. In May 2010 they placed an order of a complete system from with 1,2 MWe and
2,2 MWth power output, a plant which will be commissioned in September 2011.

This particular customer have chosen to use wood pellets as fuel but the fuel is considered flexible, for instance branches & roots, bark, straw, rice huskies etc. The advantages with the cyclone gasifier compared with others are that the construction is simple, cheap and robust that can handle rapid load changes.

The temperature in the cyclone reactor is about 850 °C and the gas is cooled to about 450°C before it reach the first cleaning stage. The tar particle content from wood fuels is about 7 g/Nm3 with a normal stoichiometry of 0,25. The first cleaning stage is a multi cyclone which separate the course content from the gas. After this stage the gas purity has been increased to

The last cleaning stage is the wet electrostatic precipitator (WESP) which can deal with sub micron capture. The WESP is using the same RME oil as the scrubber circuit and the purity after this stage is guaranteed

As the temperature in the reactor is quite low we can handle "difficult"
fuels like straws, bark and rice husk with no risk for ash melting. Also we can easily handle high volumes of ash from the reactor and the multi cyclone stage which enables these "difficult" fuels.

Beside the in house engineering team and the fantastic researchers at ETC we have had great help from Cummins Power generation who we have a close collaboration with. In the full scale plant we have already installed a Cummins QSV91 engine that Cummins will operate for 6000 hours before commercialization for syngas.

I attach a sales folder for general information about our technology and promise to send the first official reports that will be launched. The picture you can see in the folder shows the pilot plant which has a total foot print of 6 meters long, 2,8 meters deep and about 6 meters high.