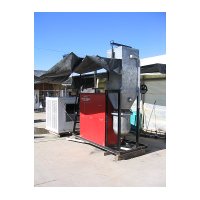 In 1985, one of the first four Pacific Class gasifiers built by NEI Fluidyne, was sent to the USA, and later in 1989-90, joined by two more, and stored in an Emergency Civil Defense Complex in Montana. Only the first was slightly used before storing.

Released for sale in 2006, they were purchased by Californian interests, and in July, was able to assist to set one up for evaluating both electrical generation, and process heat. The new owner wishes to remain anonymous, as visitors would interrupt his normal business activity. It is possible to say that he is a Forestry Nurseryman, and wishes to investigate in his own time, if any advantage can be found to grow a specific fuel wood forest. This work is to support the possible environmental changes that might affect existing forestry, and to ensure appropriate species are available for new energy forests. Wood chip size will also feature in these studies, and we will continue to work closely over the next few years on that aspect of gasifying forestry wastes.

For this project, a search of the Internet, found a Onan natural gas generator, driven by a 7.5 litre Ford engine, which at 1800RPM, gave us 28 kWe of electrical power on producer gas. As this engine had only 560 hours of operation, it was in reasonable condition, but the starter needed replacement. All that was required was a simple conversion of the throttle inlet, by the fitting of a pipe tee connection for the gas/air mixture. The gas and air were mixed off engine, using a pipeline terminal, mixer/condensate separation assembly so no that water was entrained into the engine. No alteration was made to the ignition timing.

High ambient temperatures (34°-36°C) combined with low humidity did require the assistance of an evaporative cooler to assist the gasifiers gas cooling system. The cooling phases were out of step with the components doing the work, but achieving an average 20°C drop in temperature soon sorted out the power drop caused by high gas humidity. We also found that engine stability improved when the combustion air was drawn from the colder air stream, as the volumetric efficiency increased. This confirms earlier engine trials we conducted in N. Ireland, that reheating producer gas to dispose of aqueous condensate, is detrimental to the power output of the engine.

Operating in the blown mode, the gasifier was able to be pushed to it's maximum output of 90 m3/hr, at 15” WG input air, and provided quite an impressive clean gas flare. In day light, it was difficult to see the flare colour, with only shimmering heat shadows on the wall, and the flame roar, to indicate that gas was burning. Possibly the process heat option will have the greatest application in colder climates as the increasing price for propane is creating a need for alternative heating.

The following photographs provide a glimpse of this project in the temporary site used for the Training Programme.