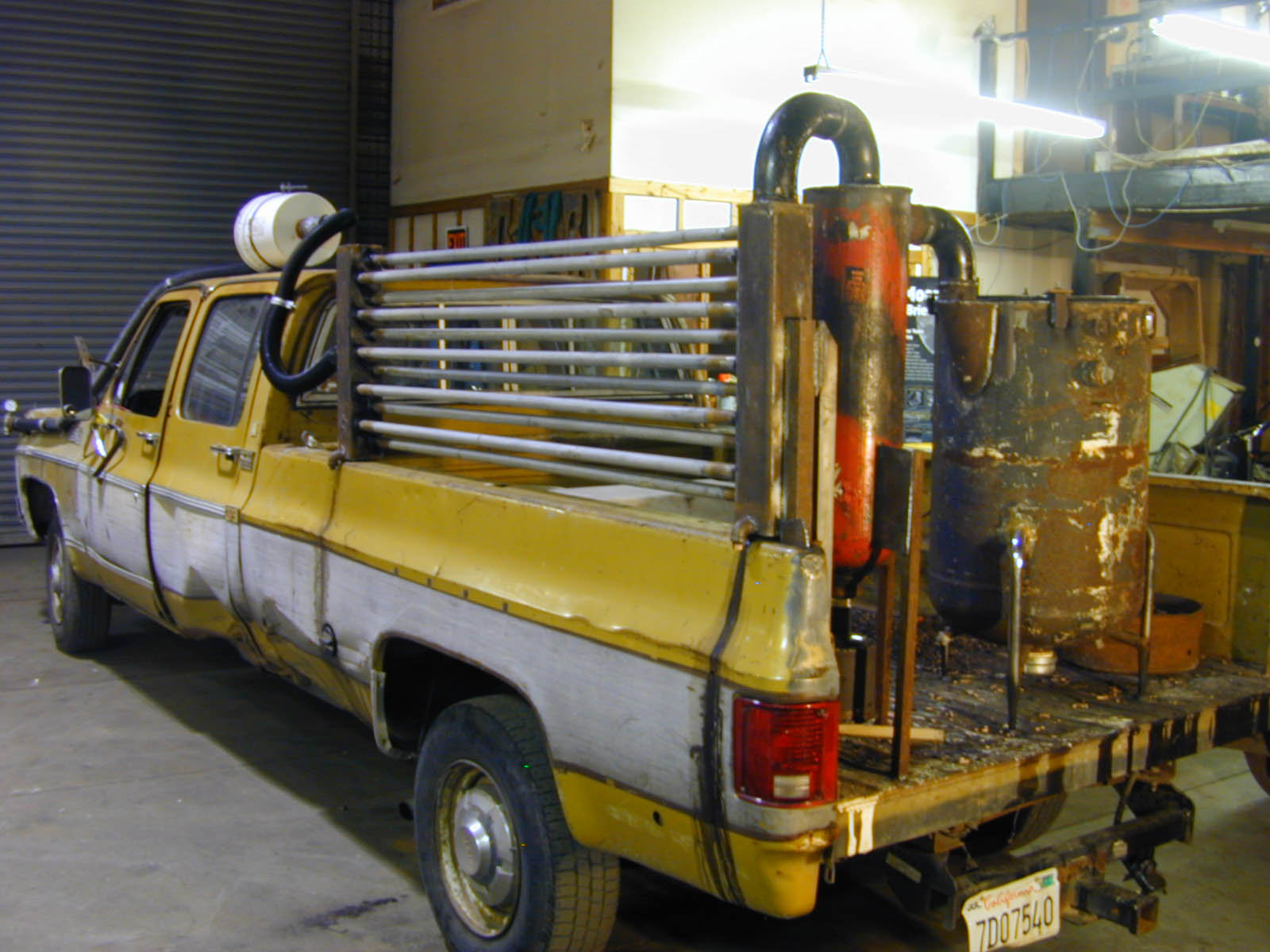 I finally got pictures up of our woodgas truck. see here for a quick webpage on it:
http://www.whatiamupto.com/gasification/woodgastruck.html

(note that none of the links from here work. this is the frame for a gasification site i am building, but much work remains.)

some details on current status.

i think the most interesting thing i think we did on this was to make the gasifier hearth/firetube easily interchangeable. our gasifier tank is really only a gas cowling and ash catcher/shaker assembly. into this various size firetube can easily slip in and bolt down. this allows for easy changing of firetube size changes as well as conversion to completely different types of gasifier hearths. by keeping the cowling tank large (a 20" diameter propane tank), i have lots of internal space to play with to insert imbert type centers, or whatever else might get cooked up.

right now we have three firetubes for this: 12", 10" and 8". we mostly just use the 8" to err on the too small side to minimize tar. but we run it will all the tubes in, creating essentially a 4 wall tank within a tank. the resulting insulation is excellent, especially if you fill it with char first, and force the smaller fire tubes down into the char, resulting in char between the walls, which further helps insulation.

i very much like this flexible gasifier system. i recommend it highly for us beginners. it is a great foundation on which one can play. making a new firetube or hearth that bolts down into a common cowling mount is much easier than starting from scratch for each hearth design/test.

the other very helpful thing we did was mount a vacuum gauge in the gasifier plumbing, in clear view of the driver. it is an inches of water, not mercury, gauge. it helps much to figure out what is going on. and what is going on is often at issue in the beginning of gasifier work.

yes, that long copper pipe to driver's side door is to control the mixture butterfly. we currently do the mixture holding the pipe while driving.
throttle is the existing butterflies plates in the carburetor so the truck footpedal still works as usual. we added an electric fuel pump, which we shut off when we want to switch to woodgas. very simple.

woodgas condensate is still about the worst thing i have ever smelled in my life. the not so secret secret here, is that woodgas condensate is bongwater, and has that same absolutely terrible smell that most of us tried to forget many years ago. but here it is again, back with a vengence. the whole thing is rather funny. but a real design goal should be how to minimize the bongwater, and really, smartly recycle it back into the system with smart temp sensing so as to now overwhelm the reduction bed (and never have to touch the stuff again, ever).

the other significant thing i realized is the significant problem of post shut down pyrolysis smoke with an open top design. if you shut down a hot unit, with lots of raw fuel yet to be pyrolysized, it will sit there and pyrolyse, and smoke terribly, for hours really. i assume closed tops would do this less worse, as air access is not as good as an open top. but i think the closed tops would smoke too.

such seems yet another reason why charcoal gasifiers were considered more usable in wwII. charcoal is already pyrolysed, so no smoke when hot and inactive, and very little tar to deal with. for raw biomass units, this post shutdown smoke problem argues for keeping the fuel in the pyrolysis area as small and concentrated as possible. separating the zones, with a star valve between them, seems not to be overkill, after seeing the amount of nasty yellow smoke one can make with one of these units on shutdown.

all and all, a great amount of fun. and so much to learn while doing it.
thanks to everyone here for all the help and feedback.